Lurking in the dust at the back of a cupboard in my father’s house was an unopened roll of 120 format Ilford Delta 400. My father died in 2003, this film expired in 1997 so it’s probably safe to say that even he had forgotten about it.

It’s a couple of years ago ago now, my step mother was living in a nursing home and the old house had to be sold to fund her care. Here I was, going through two lifetimes’ worth of stuff, deciding what to rescue and what to leave to the ravages of house clearance.  This roll of film and a couple of others made it back with me for their new life in a drawer in the darkroom.

I’ve never been one to mess with old film, chemicals or paper. For me the element of randomness thrown in to the mix by aged, unpredictable materials has always been a step too far. The struggle with image composition and the process of developing and printing means I welcome all the determinism I can get from my chosen materials. I’ve seen the results of tired developer on film where a roll of film costing £6 has been compromised by 5o pence worth of chemicals. It’s a false economy.

And yet. I had this film. What was I going to do with it?

February 2020 was a wet month. I finally unhooked from myself the idea that every picture has to be given the very best. Let’s face it, for all but a very select few, our images are not going to go down in the annals of anywhere. The important thing is to have fun and enjoy ourselves in the pursuit of them. I loaded the 1997 Delta 400 into the ETRSi  Bronica’s film back, put on my wellies and went for a walk in the direction of the floods.

If I had been at all sensible I would have remembered that ideally I should have shot at 200ASA and developed the film accordingly. But I didn’t. I was out there, my mind went blank and so I shot at 400ASA, the box speed. As it was “free” film, I felt a lot more fluent than I usually do, especially when using medium format with its fewer frames per roll than 35mm. Also, as it was a wet afternoon, the idea was to take the pictures and develop them as soon as I got back in.

You see I had it almost right. I knew that the film sensitivity might be reduced. Having taken all the pictures at 400ASA, my idea was to push it a stop and develop it at 800ASA. In retrospect this was wrong as this really enhanced the fogging. Next time I’ll know different, perhaps. For what it’s worth, developer was ID-11, 1+1, 17.5 minutes @ 20°C. The negatives looked really fogged and I was doubtful of getting anything out of them. There’s also a mottling which I believe is a common thing with old 120 film, due to the backing paper.

To round off the retro session, I printed on some God knows how old Ilfobrom Grade 2 paper, also rescued from my father’s house. 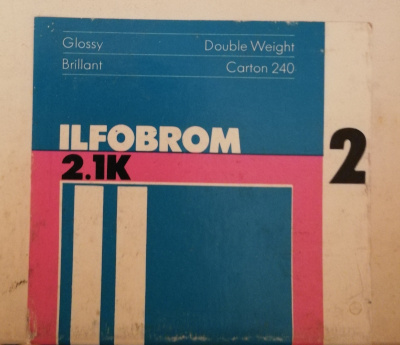 I have no idea how old this is!

That’s hard to get a full black out of any more but I think it has all come out OK.